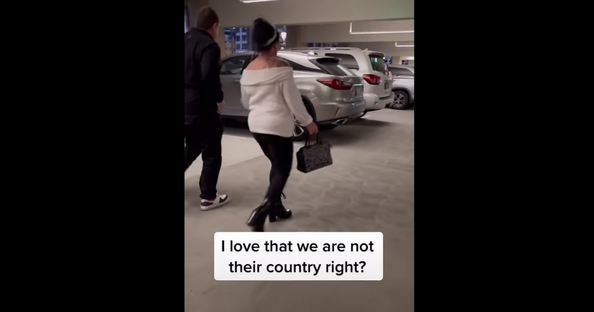 A teacher was caught making racist remarks to an Asian couple in California, a TikTok video shows. Now she has been fired from her job at a Christian school in Temecula, the school said.

And her husband, a city worker for Coronado, has been placed on leave, according to a statement from the Coronado city manager.

The Asian couple was shopping in Newport Beach when they say the teacher and her husband began making anti-Asian comments about the two, according to an Instagram page that reshared the now deleted TikTok video.

The unidentified Asian American couple said they were shopping at Fashion Island when the Millers walked by them, made eye contact, and said, “Ooh. COVID is gonna get you.”

The white couple allegedly continued to talk loud enough for the couple to hear, saying, “Those Chinese spreading COVID.”

They continued their rant when another Asian American family walked by, the couple who recorded the video told @jackfroot. “Go back to China,” they allegedly said. “Stop spreading COVID.”

Actions always have consequences. Roger Miller has been placed on leave and Sandie a.k.a Sandra Miller has been fired after they were filmed telling an Asian couple to go back to their country. #racist #racism #StopAsianHate @thatdaneshguy https://t.co/NTkOVTI0Z9

Sandra Miller an employee at a school in Temecula has been fired and her husband Roger Miller was placed on leave from his job as an employee for the city of Coronado after the two were accused of making racist comments in a now-deleted TikTok. https://t.co/G16HGTh3Tq

Previous Medicare To Offer Free Test Kits From Pharmacies
Next JMG News: So I Did Not Get Selected For Jury Duty