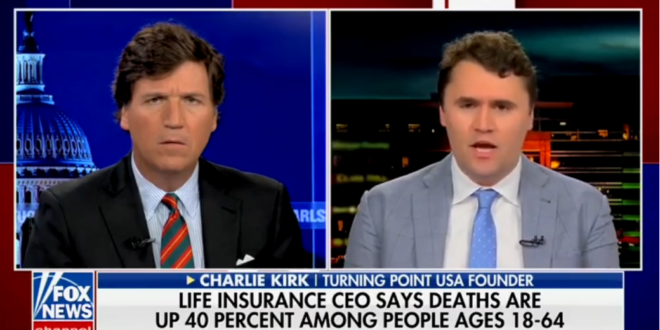 One business that actually tells the truth regarding the death of Americans is life insurance. They have to get this right. They have entire teams of actuaries that study this data all day long.

It’s not the public health authorities that are warning this, it is a single CEO of a major life insurance company that says, “Hey, by the way, there’s a 40 percent increase in deaths.”

Ten percent, he said, would be a once-in-200 year-catastrophe. We have a 40 percent increase in death, and it’s not because of COVID. And we deserve answers.

Well, at least we know how many times Joe Rogan used a bad word in a podcast the last ten years. I guess we’re getting our pronouns right for our six-year-olds, but we have a 40 percent increase in death amongst the supposed healthiest portion of the American population.

You’ll be shocked to learn that the insurance executive in question specifically said that the deaths are due to COVID.