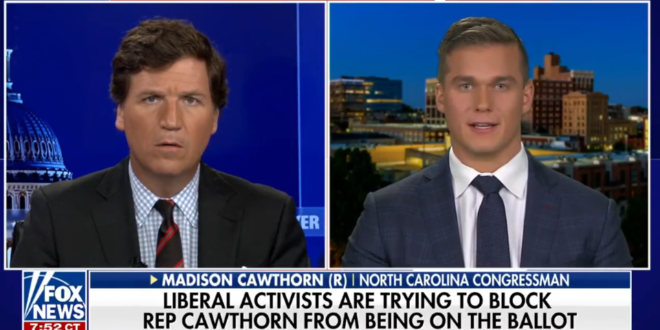 Cawthorn Concedes He Might Be Kept Off NC Ballot

“Tucker, they are actually very close. Now, what’s going on in North Carolina is that the state board of election, a panel of five people, is asserting that they have the ability to bar 740,000 plus Americans in my district from being able to elect me to send me to Washington to be their weapon to fight against the deep state.

“And make no mistake, Tucker, this is not just about a 26-year-old from western North Carolina in a wheelchair. This is about the future of our very nation.

“If they’re able to set this precedent in North Carolina, they will be able to keep anybody with valid or legitimate concerns to be not be able to hold office, thus ending the America-first movement.” – Madison Cawthorn, last night on Tucker Carlson’s show.

JUST IN: Madison Cawthorn just appeared on Tucker Carlson and warned Fox viewers that some of his constituents “are actually very close” to disqualifying him from holding office for violating the insurrectionist clause of the 14th Amendment.

Previous Cultist 2016 House Candidate Got Help From Russia
Next Police: 4-Year-Old Shot At Us At Father’s Instruction