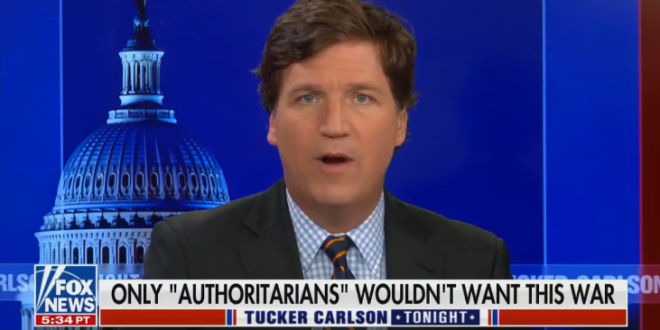 Tucker Carlson ripped Ukrainian President Volodymyr Zelensky as a dictator on Monday, and derided American politicians he said are attempting to garner sympathy for he and his country.

After attacking Democrats and “some low-IQ” Republicans, Carlson scoffed at the notion that Ukraine is even a democracy.

“What exactly is Ukraine like, what’s its government like?” Carlson said. “Turns out, it’s run by a dictator who’s friends with everyone in Washington.” He also argued that it appears as though the Biden administration is running Kyiv, Ukraine’s capital.

Tucker Carlson Claims Ukraine Is ‘Run By Dictator Who’s Friends With Everyone in Washington’https://t.co/82gIxZAWVV

Tucker says Ukraine is not a democracy pic.twitter.com/MZFMmh78gj

Tucker Carlson knows absolutely nothing about Ukraine and cares even less. Who is feeding him this information, trying to sway public opinion against U.S. supporting Ukraine, on the eve of a possible invasion by Russia? Those same “Kremlin intermediaries”?https://t.co/VR9N3GGG3C