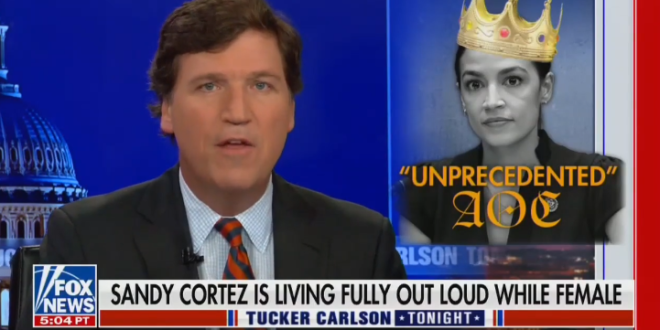 “No one has done more personally to degrade American womanhood than Sandy Cortez has. She is living proof that 60 years of feminist liberation did not work.

“Sandy Cortez is not empowered. She’s neurotic and silly. She’s far more frivolous than any 1950s housewife ever was. June Cleaver was a more serious person. At least she made dinner.

“There is no place on Earth outside of American colleges and newsrooms where Sandy Cortez would be recognized as a quote, woman of color, because she’s not! She’s a rich entitled White lady.

“She’s the pampered obnoxious ski bunny in the matching snowsuit who tells you to pull up your mask while you’re standing in the lift line at Jackson Hole.

“They’re all the same. It doesn’t matter what shade they are.”  – Tucker Carlson, referring to a new book about AOC.

Remember when the right wing had a meltdown when I suggested they exhibit obsessive impulses around young women?

Well now Tucker Carlson is wishing for… this on national TV.

You’re a creep bro. If you’re this easy w/ sexual harassment on air, how are you treating your staff? https://t.co/RFbOIRSmxQ

Tucker Carlson is a good example of why the right and Fox News hates accountability by using the phrases “cancel culture.” Because, if any other commentator on any other news network said what Tucker said about @AOC, they would have been fired.

Tucker Carlson: It’s so creepy of AOC that I’m having sexual thoughts about herpic.twitter.com/m9dcxvp5iZ