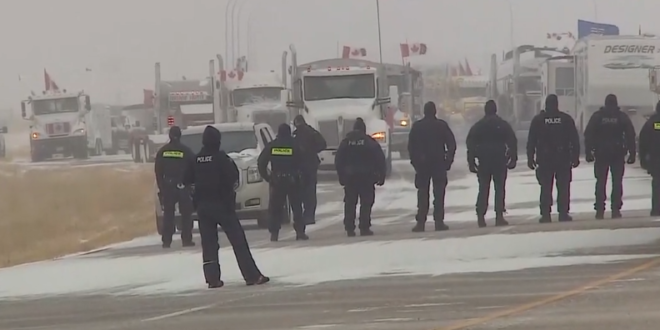 While the Canadian standoff against Covid-19 restrictions paralyzes Ottawa, it’s becoming viral online as a rallying cry for leading U.S. Republican politicians, far-right influencers and white supremacist groups who have transposed the criticism of Canadian Prime Minister Justin Trudeau’s government to an international audience for their own political gain.

On Telegram, a social network favored by the far-right because of its lack of content moderation, groups of tens of thousands of supporters have quickly mobilized to support the Canadian protests from across the United States, European Union and farther afield, based on POLITICO’s review of these channels.

What started as an anti-vaccine protest in Canada quickly morphed into a global movement — organized via social media and championed by far-right influencers and extremist groups. The future of global anti-Covid mobilization has arrrived 👉 https://t.co/YX6LsknRVb

Previous Macron Visits Moscow In Bid To Avert Ukraine Invasion
Next AP: Trump Couldn’t Understand Why His White House Staffers Weren’t As Thrilled To Watch Riot As He Was