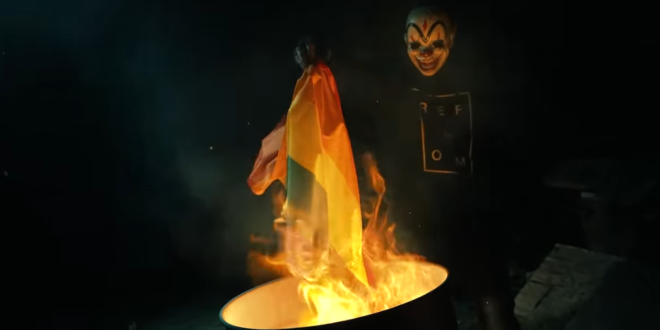 Tyson James, a MAGA-loving rapper, has released a new video in which he celebrates being called a bigot while setting fire to LGBTQ rainbow flags. “I’m gonna serve God, I’m toxic,” he raps defiantly. “Ain’t with the LGBTQ, y’all ain’t gonna make it, believe me you, just face it.” As he raps these lines, he spray paints the word “ABOMINATION” onto a rainbow flag, and later is seen in a mask burning a rainbow flag in a trash can.

MAGA rapper Tyson James, whose music was once promoted by Lauren Boebert in a tweet, released a music video of himself burning rainbow flags. pic.twitter.com/yfPPzXdy5h

Another censorship fail from the Left.

Patriots rally and put the song at the TOP of the iTunes chart, even beating out Adele.

I’ve got my copy! pic.twitter.com/8icr5P5PtU