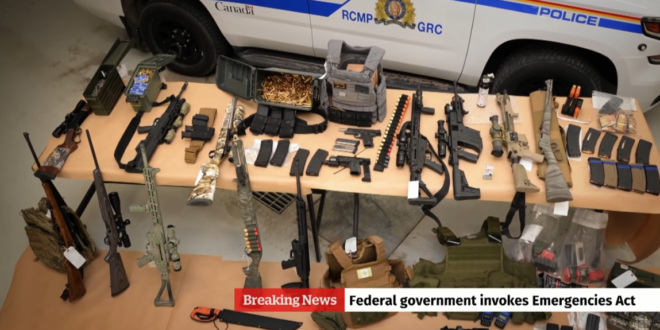 Two of four men charged for allegedly plotting to kill cops if they disrupted a trucker border blockade have connections to a shitposting far-right group.

Police have posted an image featuring the weapons and gear they seized. In the image, you can see plate carriers contained several patches, an “infidel” patch that’s popular in the anti-Islam community, and a simple patch with a white line scrawled across it.

This symbol corresponds to the online community of Diagalon — it’s named for the idea that they would slash Canada and the states diagonally and the western side could be their new separated home. The group is centered on a far-right anti-government ideology, not unlike the Boogaloo Bois.

Two of the three men arrested in Coutts and charged with conspiracy to commit murder are connected to a shit-posting, far-right, anti-government community.

🧵Following the RCMP raid and seizure in #Coutts, Chris Lysak, once called the “head of security for Diagolon” by de facto leader Jeremy MacKenzie, has been accused of conspiracy to commit murder. 1/ pic.twitter.com/s8xLT8WbXR

When police released images of the seized firearms, we were interested in the patches. One of the tac vests on display shows the black & white flag of Diagolon, the symbol of a network of far-right accelerationist survivalists. 5/ pic.twitter.com/nVDH4cuNoK