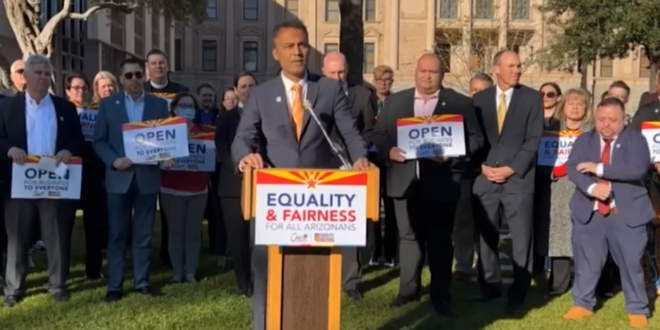 A bipartisan group of Arizona lawmakers that includes the Republican House speaker announced Monday they were introducing legislation that would for the first time protect gay and transgender people from discrimination by businesses, landlords and employers. The proposal is backed by many business and faith leaders, but opposed by a powerful social conservative group.

Even with the powerful support of Speaker Rusty Bowers, the measure faces long odds in the Legislature, where social conservatives hold considerable sway with Republicans in the House and Senate. “I do not anticipate a rose strewn path in front of me, but we are here honorably and working together,” Bowers said. Bowers would not commit to holding a vote on the measure if it’s not supported by a majority of House Republicans.

Arizona lawmakers announced they were introducing legislation that would for the first time protect gay and transgender people from discrimination by businesses, landlords and employers. https://t.co/haIhF11rrQ

Standing with @OneCommunityAZ and @equalityarizona today to support our LGBTQ+ community as they announce the introduction of a bill to update Arizona’s existing non-discrimination laws to include LGBTQ Arizonans and ban the dangerous and harmful practice of conversion therapy. pic.twitter.com/tOzLXBIWUX

“LGBTQ issues are non-partisan, they go beyond partisanship because they affect all Arizonans.” — former @AZLGBTQ Chair @danielforaz, who has sponsored statewide non-discrimination legislation previously, kicks off today’s press conference with @OneCommunityAZ & other partners. https://t.co/oL06SITm5y pic.twitter.com/8yXC4lObxj

Previous Extremist QAnon Rep Calls For Blockade Of Super Bowl
Next The Kraken Pleads For Law License: I’m Not A Lunatic