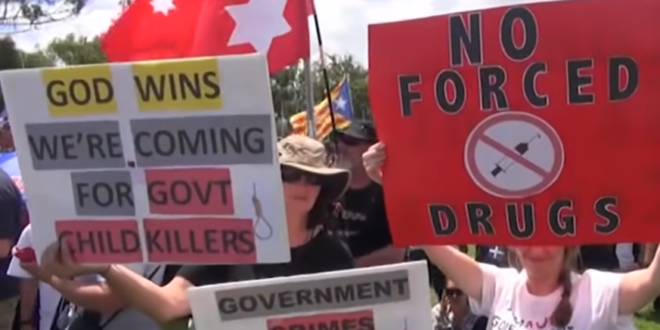 A group of anti-vaccination demonstrators and conspiracy theorists have blocked roads and targeted businesses in the Australian capital of Canberra ahead of the return of federal parliament on Tuesday, in an echo of similar protests in Canada.

Hundreds of cars and trucks waving Australian flags, military insignia and campaign banners for former US president Donald Trump descended on the city over the past week calling for the end to vaccination requirements in businesses and places of employment.

On Monday, anti-vaccine protesters demanded an end to COVID-19 mandates and the resignation of parliament. As part of a renewed push to legitimise their grievances and overthrow the government, the group has called for 5 million supporters to converge on Canberra in the coming weeks.

This comes after crowds swelled from hundreds, part of a “Millions Against Mandatory Vaccination” protest, to at least 1000 on Saturday. ACT police said they estimated around 3000 people were at protests on Monday.

The Australian protests have attracted a mixed bag of demonstrators. These include advocates of the “sovereign citizen” movement that generally believes people aren’t bound by certain laws and QAnon-style conspiracy theorists who claim without evidence that the government is run by a secret network of pedophiles.