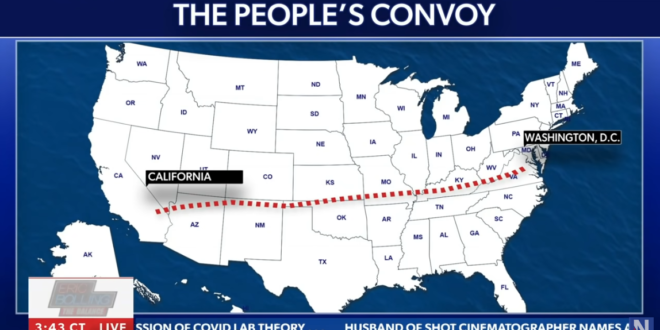 The American truckers’ protest dubbed the “People’s Convoy” is set to depart in late February heading toward the nation’s Capitol to protest government COVID-19 mandates they believe are unconstitutional.

The convoy is set to have an estimated 1,000 U.S. truck drivers participate. On Newsmax TV’s The Balance, Eric Bolling was joined by organizers of the convoy, Brian Brase and Maureen Steele, to kickstart the message.

Although the group hasn’t made a final map of the convoy, Brase says updates will be coming out on their Facebook page in the coming days.

Read the full article. Their Facebook page has 92,000 members. In the second clip below, Brase claims the convoy will launch on February 23rd.

Previous Giuliani: My Proof That Hillary Spied Is “In My Bedroom”
Next Hate Pastor: Male Witches Are Disrupting My Church