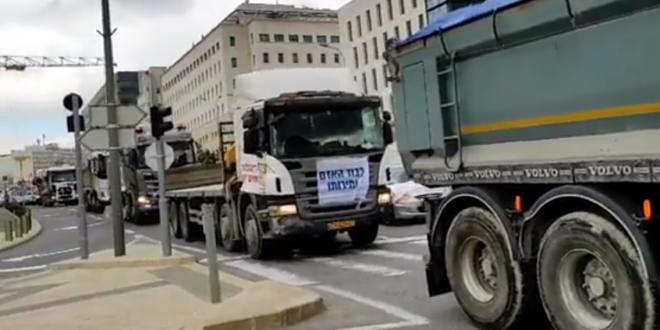 Hundreds of vehicles drove along the main highway from Tel Aviv to Jerusalem on Monday and converged on parliament to protest against COVID-19 curbs in a convoy inspired by demonstrations in Canada.

Other protesters stood on overpasses and at junctions as the so-called “Freedom Convoy” passed by, withbanners and Israeli and Canadian flags flying from the vehicles.

“Freedom doesn’t look like this,” read one sign, showing a picture of a girl in a mask. Outside parliament, protesters sounded horns and beat drums, and called for pandemic restrictions to be lifted.

HAPPENING NOW IN ISRAEL: 30,000 vehicles and 40 convoys from 40 cities across Israel converge into one united Israeli Freedom Convoy in Jerusalem to protest the undemocratic #Covid restrictions. Inspired by the great #CanadianFreedomConvoy#IsraeliFreedomConvoy #FreedomConvoy pic.twitter.com/EriCLGPi16

In #Jerusalem #Israel outside Israel’s Knesset, citizens join #IsraelsFreedomConvoy to call for an immediate annulment to Israel’s state of emergency and to the recent “Enabling Act” which establishes the infrastructure for #COVID19 laws and which compromise basic human rights. pic.twitter.com/vEChlb78ja