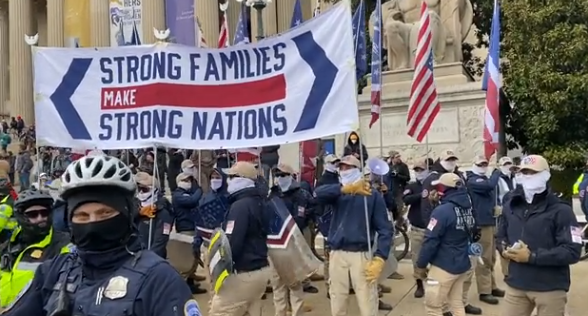 While politics is always a common theme at the gathering, this year attracted some extreme varieties. Along the edge of the crowd was a group of men with an “America First” logo. The flag was waved by insurrectionists who attacked the Capitol on Jan. 6, 2021 — including at least one who breached the Senate chamber — and is tied to Nick Fuentes, a white nationalist.

Footage showed the America First group chanting “Christ is King!” while marching on Thursday, a phrase they often shout when gathered. Meanwhile, members of Patriot Front also marched near the rally, handing out fliers to March for Life participants as police escorted them. The white nationalist group has attended anti-abortion protests in the past, although their arrival has frustrated organizers.

For the second time in as many years, American fascist organization Patriot Front is facing a humiliating leak of internal communications, messages revealing a trove of evidence pointing to coordinated criminal activities in multiple states, including New York, Washington, Indiana, Virginia, Massachusetts, and Oregon.

Experts consulted by Gizmodo say the material is likely to seriously damage Patriot Front, which the Anti-Defamation League has identified as one of the biggest sources of white supremacist propaganda in the U.S. and mostly recently was in the public eye for a march of an estimated 100 cadres on the National Mall in Washington, DC, last month.

Unicorn Riot has much more on the leak.

The white supremacist group Patriot Front is at the March for Life, its leader Thomas Ryan Rousseau leading chants of “Reclaim America.”

MPD is surrounding them as antiabortion protesters march by & toward the Supreme Court. A counterprotester yells for them to go home pic.twitter.com/pxf5tv8Faq

DC Police appear to be escorting them away from the March for Life. They’re now on 6th St NW, passing Indiana Ave NW

Counterprotesters continue to follow them, yell at them to to home and criticize police.

“Just like J6, they walk right in,” one counterprotester yelled pic.twitter.com/3EPgtLGj9T

“Christ is King!” chants from a contingent of America First Groypers at today’s March for Life in DC pic.twitter.com/A2bFHBygJ4

An extensive leak from inside the neo-nazi group exposes their coordinated national efforts to engage in racial intimidation: https://t.co/KTEqyQy9gh pic.twitter.com/3dGp6XynVw

Unicorn Riot @UR_Ninja and DDoSecrets just published nearly 500gb of data from the neo-Nazi group the Patriot Front. The data includes videos, photos, documents, and chat messages, leaked by an infiltrator with access to their private RocketChat server https://t.co/SI9znODcDt

The white nationalist group ‘Patriot Front’ has arrived in DC and is now at the head of the ‘March for Life’ as it is about to begin. pic.twitter.com/yfKsqnTCS9

I’m at the police line between the pro life march and Patriot Front (feds probs) pic.twitter.com/JaIlNLqkQQ

The hate group Patriot Front has shown up at the DC anti-choice march. pic.twitter.com/i8t6VKhZAX

Patriot Front is white supremacist that broke off from Vanguard America after the deadly 2017 Unite the Right rally in Charlottesville, where a man who marched with Vanguard America sped his car into a crowd, killing Heather Heyer.