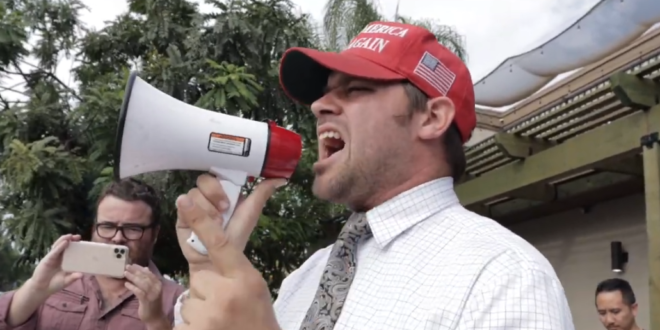 Police were called to step in after a group of conservatives wearing orange shirts that said “RINO hunters,” with crosshairs making a target of the “O,” tried to storm a Republican Party of Orange County meeting in Costa Mesa on Monday night. The group was led by Nick Taurus, a self-proclaimed American Nationalist who last year spearheaded a protest during a town hall for Rep. Katie Porter, D-Irvine, that turned violent.

Taurus, R-Laguna Hills, is now challenging GOP Rep. Young Kim in the CA-40 House race. He’s labeled Kim, who’s been endorsed by the OCGOP as a RINO, a derogatory name used by the far-right for more moderate politicians who they deem “Republican in name only.” Costa Mesa Police say they were called to the meeting at 6:39 p.m. Monday on reports that a group of about 20 demonstrators were refusing to leave the “private political meeting.”

In the 2021 clip below, Taurus and his father declare that all the Mexicans ever gave this county is “nachos.”

The most shocking part of this GOP story is not the presence of white nationalists, anti-gay zealots, or fights with Latinos – it’s that the OC GOP acknowledged COVID exists https://t.co/NEGizFSpbE

It looks like Orange County GOP Chairman Fred Whitaker is losing control of his party. Yesterday, Costa Mesa PD had to break up a fight at the OC GOP Central Committee mtg. Some believe the recent restrictive attendance to mtgs was bec of internal fighting & not covid safety. https://t.co/0TXoVyQots pic.twitter.com/FWxEnuUFvK

Police were called after a group of conservatives wearing orange shirts that said “RINO hunters,” with crosshairs making a target of the “O,” tried to storm a Republican Party of Orange County meeting in Costa Mesa on Monday night. h/t @inminivanhell https://t.co/ptd3o5s1gN

Expect more of this type of thing as far right and/or Trumpist extremists continue their play for power in the GOP.https://t.co/JRGzKhG6i3

Nick Taurus, running against Katie Porter, and some of his supporters at a school board meeting last night. Nick is the one in the tie – gotta look the part. pic.twitter.com/7zWi0iPX8q

GOP candidate, Nick Taurus urged his supporters to “Confront Katie Porter” in a post that featuring a pro wrestler theme. He followed his own advice and got into a scuffle at her event. Brown shirts broke up their opponent’s rallies with violence. https://t.co/5zeucUkvPj

Nick Taurus is more than an anti-Science protester— here he is in the blue tee shirt ripping up BLM posters at a protest in Yorba Linda, 9.26.20– he also smacked my phone out of my hand that day. https://t.co/Q8KmN6DbRS pic.twitter.com/wZStKvqLhq