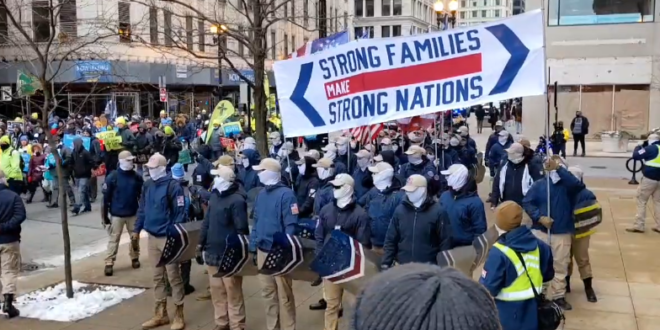 Anti-abortion demonstrators confronted the far-right group Patriot Front members who wanted to attend a March for Life rally in Chicago on Saturday.

In videos posted on social media, the white supremacist group members can be seen at the march in their signature khaki pants, navy blue jackets, baseball caps, and face coverings.

Many also wore shin pads and carried shields. “What are you carrying shields for? This is a peaceful demonstration,” one March for Life demonstrator shouted at the group. “You guys are an embarrassment,” the demonstrator said.

The reception from both residents and (some) March for Life participants was icy. pic.twitter.com/zNmfQIwCWd

Negative reception from some of the March for Life crowd, accosting Patriot Front members and accusing them of “hijacking a pro-life movement” as they march through Chicago pic.twitter.com/hkD3X7ikvR

After a pause, roving khaki-clad white nationalist org Patriot Front now following same route as March for Life again, around a block ahead of M4L on Michigan Avenue in downtown Chicago. pic.twitter.com/Nc7C1OZbrN

Another neo-Nazi group, Patriot Front, which is a re-brand of Vanguard America, which once was a part of the Nationalist Front, led by Matthew Heimbach, has a long history of showing up to support pro-life rallies, specifically in #Chicago. pic.twitter.com/8EyOXZAjY2

Previous Anti-LGBT Ex-MI House Speaker Admits To Multiple Affairs, Claims He And Student Were Consenting Adults
Next Australia To Djokovic: We Never Guaranteed Your Entry