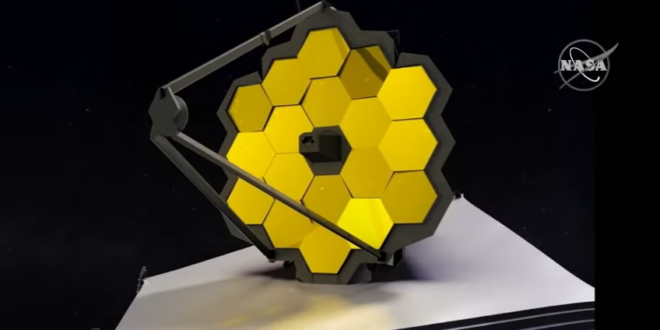 Since its successful takeoff, the $10 billion telescope has been busy deploying its various systems and structures and traveling over 930,000 miles (1.5 million kilometers) to its new home: L2, the second sun-Earth Lagrange point, which it will orbit. Lagrange points are gravitationally stable points in space.

The telescope arrived at a location beyond the moon after a final, roughly five-minute firing of the spacecraft’s main thruster, sweeping itself into a small pocket of stability where the gravitational forces of the sun and Earth commingle.

From this outpost, called the second Lagrange Point or L2, the Webb telescope will be dragged around the sun alongside Earth for years to keep a steady eye on outer space without spending much fuel to maintain its position.

The James Webb Space Telescope, named after a former NASA administrator who oversaw the formative years of the Apollo program, is seven times more sensitive than the nearly 32-year-old Hubble Space Telescope and three times its size.

🏠 Home, home on Lagrange! We successfully completed our burn to start #NASAWebb on its orbit of the 2nd Lagrange point (L2), about a million miles (1.5 million km) from Earth. It will orbit the Sun, in line with Earth, as it orbits L2. https://t.co/bsIU3vccAj #UnfoldTheUniverse pic.twitter.com/WDhuANEP5h