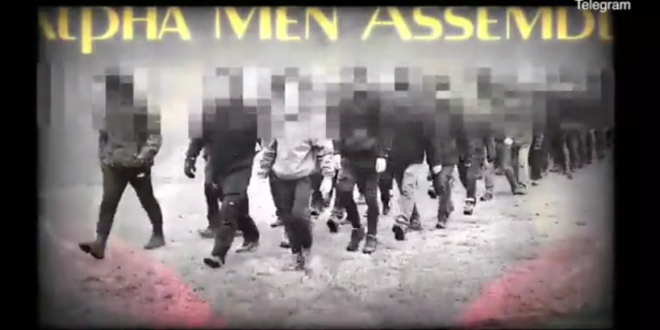 Thousands of anti-vaccine conspiracy theorists have joined a group on social media that threatens ‘direct action’ and promotes combat training and mixed martial art sessions. Alpha Men Assemble, an online collective with more than 2,800 followers, has planned meetings to practice ‘training and strategy tactics’ in London and Lanarkshire.

At its most recent meet, close to 100 activists were pictured boxing and grappling with one another on a beach at Littlehampton, West Sussex.

Those attending are told to bring black uniforms, boots and a hat in order to ‘defend our children and women’, ahead of a ‘task’ that will be made clearer in late January. In video footage shared online, dozens of Alpha Men Assemble’s acolytes can be seen shoving one another in a mass brawl that was touted as a training exercise.

They call themselves ‘Alpha Men Assemble’ apparently without irony. https://t.co/gDpsNYhWBV

‘Alpha Men Assemble’ sounds like a camp group of Avengers.😂🤣Can we not just pin these idiots down and vaccinate them? https://t.co/RWuJsfc0sx

So now they’re being told to wear black shirts & drill for violence.

It’s been obvious for a long time that there’s a very big overlap between the antivax movement & fascism. They’re not bothering to hide it any more. https://t.co/56CT3vXOKM

“John O’Looney, a funeral director and antivaxer, had been due to speak at the march but is believed to be in hospital with Covid.”https://t.co/qzxodYFZTz

We knew this wd happen: