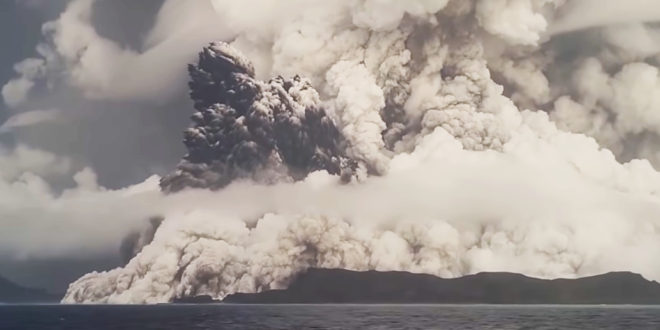 Tsunami waves caused by a giant underwater volcanic eruption have hit the Pacific country of Tonga. Social media footage showed water washing through a church and several homes, and witnesses said ash was falling over the capital, Nuku’alofa.

A tsunami warning sent residents scrambling to higher ground. The eruption of the Hunga Tonga-Hunga Haʻapai volcano was heard across the South Pacific, reportedly as far as New Zealand and Australia.

Tonga’s capital lies just 65km north of the volcano, on the country’s main island of Tongatapu. One Tonga resident, Mere Taufa, said the eruption hit as her family was preparing for dinner, and her younger brother thought bombs were exploding nearby.

Everyone has been sharing the incredible satellite footage of ongoing #volcano eruption in Tonga, but wanted to share larger scale view. You can still see the shockwave traveling out rapidly to the east (though unclear if its now sfc based or aloft).

Here’s another perspective of the eruption of underwater volcano Hunga-Tonga-Hunga-Ha’apai, which occurred near #Tonga around 830pm PST.

This time, zoomed out so you can see Australia and New Zealand to get a sense for how massive this was.

No tsunami is expected for WA/OR. pic.twitter.com/YC96cJ6amF