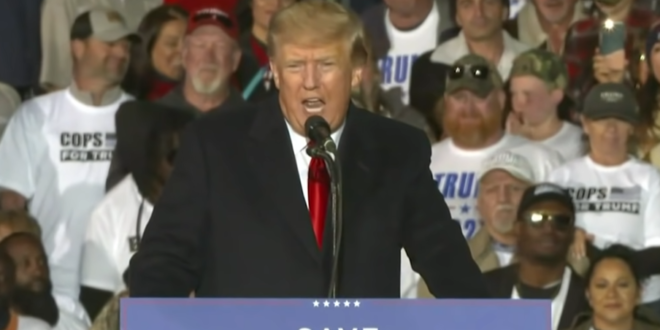 Trump: I May Pardon The Rioters If Reelected [VIDEO]

Donald J. Trump said on Saturday that if elected to a new term as president, he would consider pardoning those prosecuted for attacking the United States Capitol on Jan. 6 of last year.

He also called on his supporters to mount large protests in Atlanta and New York if prosecutors in those cities, who are investigating him and his businesses, take action against him. The promise to consider pardons is the furthest Mr. Trump has gone in expressing support for the Jan. 6 defendants.

“If I run and I win, we will treat those people from Jan. 6 fairly,” he said, addressing a crowd at a fairground in Conroe, Texas, outside Houston, that appeared to number in the tens of thousands. “We will treat them fairly,” he repeated. “And if it requires pardons, we will give them pardons, because they are being treated so unfairly.”

Trump says if he’s re-elected, he may pardon people prosecuted for their actions on January 6th pic.twitter.com/VLlkGyUr32

Trump seems very worried about criminal prosecution, actually mentioning DC and Atlanta (aspects of the attempted election fraud, I assume) and NY (Trump Org). He seems to be inviting mob action against officers of the law if he turns out to be at legal risk. Pretty dangerous. https://t.co/TklrhaxTQX

Greg Abbott realizes that the only way to keep the MAGA crowd from booing him is to just keep saying, ‘Donald J Trump’ over and over again. So he does. pic.twitter.com/wzQ3csB5cE

Junior takes the stage tonight and brags about taking 12 year-old Donnie III to a firearms shop this morning to build his own AR-15. pic.twitter.com/pH6YAR1RQa