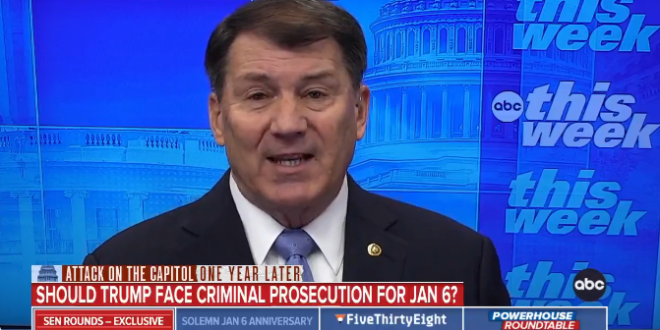 The South Dakota Republican — who was easily reelected to a second term in the Senate in 2020 — said during an interview on ABC’s “This Week” that the dozens of investigations focused on election irregularities did not yield any cases of mass fraud.

He emphasized: “The election was fair — as fair as we’ve seen. We simply did not win the election as Republicans for the presidency.”

Trump out with a new statement slamming Sen. Mike Rounds (R-SD) for going “woke” by saying the 2020 election was legitimate.

“Is he crazy or just stupid?” pic.twitter.com/vlhGqOxEGp

“Even though his election will not be coming up for 5 years, I will never endorse this jerk again.”

Republican @SenatorRounds tells @GStephanopoulos that former Pres. Trump’s fate should be left in the hands of the Department of Justice and federal courts.

“The courts are the appropriate place where those questions should be answered.” https://t.co/jHS4IXc5OE pic.twitter.com/wTD47YRGsA

“I’m going to support the Republican nominee to be president. I’m not sure that the eventual nominee has even shown up yet,” GOP @SenatorRounds tells @GStephanopoulos when asked if he could support former Pres. Trump running again in 2024. https://t.co/JqXlAsyUJI pic.twitter.com/SBrFHJa2Iq