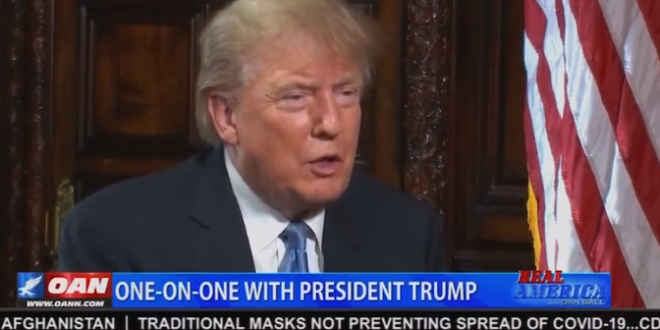 Former President Donald Trump endorsed COVID-19 vaccines again and blasted “gutless” politicians who won’t say if they’ve been boosted. In an interview with the far-right One America News network, Trump said he was pro-vaccination and that he experienced “absolutely no side effects” after receiving his booster shot.

“Many politicians — I watched a couple of politicians be interviewed and one of the questions was, ‘Did you get the booster?’ because they had the vaccine — and they’re answering it like … ‘yes’ but they don’t want to say it. Because they’re gutless,” Trump told the OAN presenter Dan Ball.

Read the full article. Among those who have waffled when asked if they’ve gotten the booster are Ron DeSantis and Greg Abbott.

TRUMP says “I’ve had the booster,” and says he’s seen politicians asked the same, but dodge.

“The answer is yes, but they don’t want to say it. Because they’re gutless… Whether you had it or not. Say it.”

“The vaccine has saved tens of millions of people throughout the world.” pic.twitter.com/LgFHT6l180

Trump is still going on boosters—and is turning it on the curiously silent Ron DeSantis https://t.co/N0Ziwl3Psu