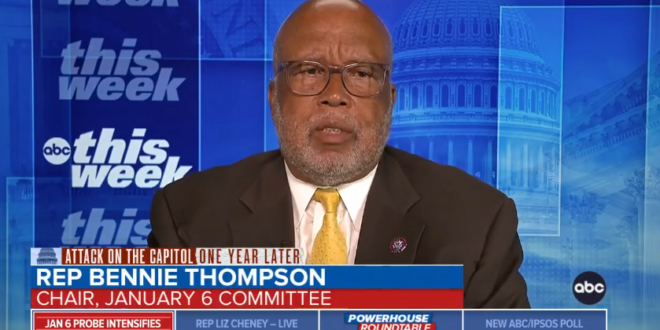 Rep. Bennie Thompson, chair of the House committee investigating the Jan. 6 Capitol riot, said his panel has evidence of interactions between members of the House and the rioters that day but not necessarily of a significant nature.

“We have a lot of information about communication with individuals who came,“ Thompson (D-Miss.) told host Jonathan Karl on NBC’s “Meet the Press” in an interview that aired Sunday. Thompson clarified that there was not evidence of House members participating in a conspiracy with rioters or offering substantial assistance — at least not yet.

Thompson, who said some members of Congress had provided information to his panel, said the committee wanted to hear from Reps. Scott Perry (R-Pa.) and Jim Jordan (R-Ohio) about their activities, though he said it was not clear if his panel would or even could subpoena them.

New: Jan. 6 committee chair Bennie Thompson says on ABC that the investigation has uncovered the insurrection “appeared to be a coordinated effort on the part of a number of people to undermine the election.”

Bennie Thompson says on @CNNSotu they have “significant testimony” the WH “had been told to do something” on Jan 6. Asked if he believes Trump’s actions warrant criminal referral: “We don’t know yet…If there’s a criminal act we believe occurred, we will make the referrral.”

Asked if the House Jan. 6 committee has found any evidence that members of Congress may be culpable in attack, chair Rep. Bennie Thompson tells @GStephanopoulos, “we’re in the process of getting to that.” https://t.co/NlMoQveFz1 pic.twitter.com/HsjBkyuor7

“If we find something that is irregular or illegal, we’re obligated to report it.”

“We have significant testimony that leads us to believe that the White House had been told to do something. We want to verify all of it,” says Democratic Rep. Bennie Thompson on the House select committee investigating the Jan. 6 Capitol Hill riot. #CNNSOTU pic.twitter.com/G2d9wWaZ87

“It was clear that we were not apprised that something would happen.” https://t.co/eAuVOrCAJr pic.twitter.com/pfLDPTNjiL

Previous Liz Cheney: Trump Is “At War With The Rule Of Law”
Next Schiff: Putin Seems “Very Likely To Invade” Ukraine