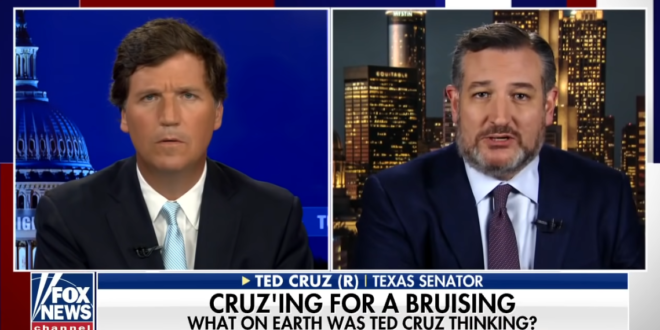 Senator Ted Cruz’s appeared on Tucker Carlson Tonight Thursday night and something miraculous seems to have happened as a result: a divided nation has united to call out just how cringe-worthy his shameless groveling to Tucker Carlson was.

Cruz appeared on Fox News prime time after Carlson excoriated the Texas senator for labeling those who attacked the capitol on January 6th of 2021 “terrorists” via an official statement, accusing him of repeating the “talking points” that President Joe Biden’s attorney general had “written.”

Tucker Carlson: “I guess I just don’t believe you!”

It’s 2016 all over again for Ted Cruz. pic.twitter.com/qxVO8HHPM5

More groveling by Ted Cruz to end his interview with Tucker. pic.twitter.com/SP92qHwOOc

Wow @tedcruz that is one of the most pathetic things i have ever seen. https://t.co/nvxMcMEU8w

Hey @tedcruz, you ass cracker smothered in taint cheese, you playing both sides makes you the worst human ALL of us have ever seen. Don’t you have a good friend that can tell you what a douche you are? Get better, cuz, damn. https://t.co/e0kLYOObnN

If you want Ted Cruz’s respect just humiliate him publicly. If you want him to pledge his undying loyalty to you, then mock his wife and his father. That’ll do the trick. What a man.

A Divided Nation Unites to Mock Ted Cruz’s Groveling to Tucker Carlson: ‘One of the Most Pathetic Things I’ve Ever Seen’ https://t.co/gtZ7CPLHt6