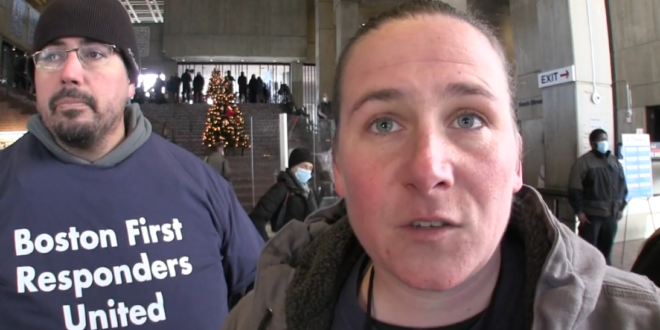 Embattled Boston Police sergeant and founder of an anti-vaccine mandate group, Shana Cottone, sparred with officers over her refusal to show proof of her vaccination status in a restaurant Saturday as the city’s new vaccination requirements took effect.

During a nearly hourlong video, Cottone and several other women sit and eat two large pizzas in violation of the city’s new vaccine policy. “History has shown, goose steppers like you trample on the rights of the innocent,” Cottone said.

Read the full article. There’s much more. Cottone is claiming a religious exemption and face three administrative charges regarding incidents involving the mayor.

Previous QAnons Say JFK Impersonated Trump At Arizona Rally
Next Ingraham On Trump 2024: I’m Not There For Him Yet