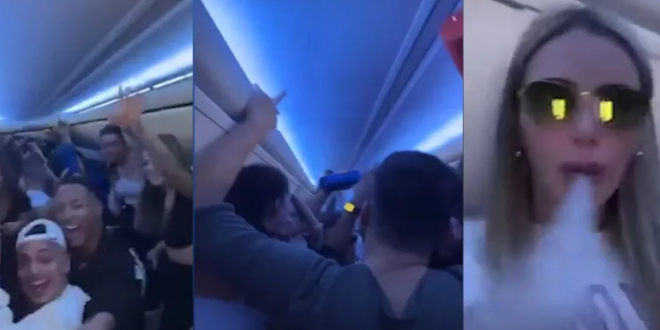 Some of the passengers of the now-infamous Sunwing “party plane” on Dec. 30 will be coming home to unhappy employers or worse, with at least two already fired. Frédérique Dumas-Joyal is one of them, losing her job of several years at Quebec’s financial markets authority, the AMF.

“She was fired,” Sylvain Théberge, an AMF spokesperson, said Friday. “The situation required it.” Dumas-Joyal was an information officer at the authority. According to her LinkedIn page, she began working there in 2017, and she has also studied law at Laval University.

A picture of Dumas-Joyal circulated showing her wearing a bright red stretchy triangular cloth over her face on the trip, appearing to be underwear, in place of a mask.

The organizer of a private trip to Mexico for a group of Quebec influencers says he has “significantly learned” from the ordeal but is still upset that airlines won’t fly the group home based on what he called “presumptions” about them. ” Videos and photos from the flight showed people without masks standing on seats and dancing in the aisles as they drank alcohol, with some vaping.

James William Awad said that it’s unfair of Sunwing and other airlines to refuse to carry the same passengers back to Canada, leaving most of them stranded in Cancun.

The question of return flights may be moot for some, at least for the moment, as one member of the trip told media on Wednesday that she’s tested positive for COVID-19, along with what she estimated were 30 other people, who are now self-isolating in Mexico and wouldn’t be allowed to fly to Canada.