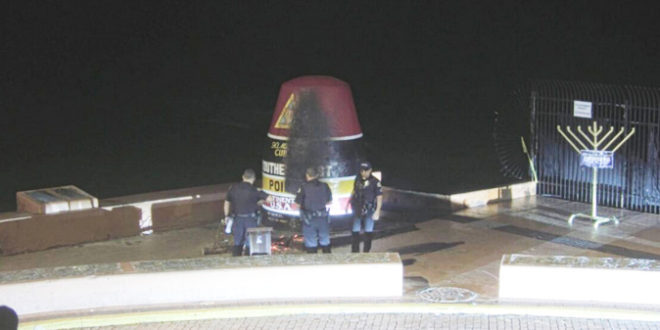 Always remember to tip your server, if you know what’s good for you. A tourist made a big impression in a Key West bar by ordering drinks three times on New Year’s Eve without leaving a tip. That enabled the staff to easily track him down after police released webcam video showing vandals setting fire to a Christmas tree.

The arson caused more than $5,000 in damage to the city’s landmark buoy marking the southernmost point in the United States, and sent the island’s “coconut telegraph” gossip chain into high alert, the Miami Herald reported Tuesday.

Like other locals across the city, bartender Cameron Briody watched the video, and recognized the 21-year-old man who had stiffed him at Irish Kevin’s on Key West’s famous Duval Street.

Images and videos from nearby surveillance cameras captured two men dragging the tree to the buoy and lighting it on fire. At times, the men ducked behind the buoy as vehicles drove by, according to the police report.

The two even took photos with their phones next to the buoy as the tree burned, according to the report. It all occurred a little after 3 a.m., and then the men ran off. News spread quickly in the tight-knit island community as images of the crime were shared on social media.

Irish Kevin’s manager Kevin Starks pulled up bar receipts for one of the men, and police were able to use that information to identify a 22-year-old man from Florida and a 21-year-old man from Texas as the two men wanted for damaging the landmark.

In the AP report, bar staff noted that they used their venue’s many cameras to also watch the pair get shot down by “all the women they were hitting on.”

ALWAYS TIP YOUR BARTENDER… A tourist left a bad impression in a Key West bar by ordering drinks three times without leaving a tip. The bartender later helped police identify the suspect after recognizing him in surveillance video of an arson attack. https://t.co/T50zPur6Th