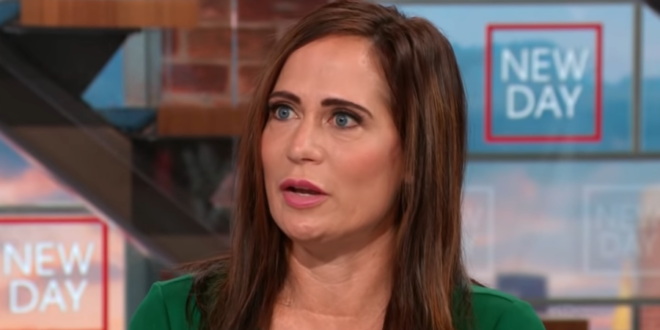 Stephanie Grisham: Trump “Gleefully” Watched The Riot On TV, Said “Look At All Those People Fighting For Me”

“I cooperated fully with the committee,” Grisham told reporters as she left the panel’s office Wednesday evening. The former White House aide and chief of staff to first lady Melania Trump declined to provide additional comment and said she wouldn’t get ahead of the committee.

A source said that Grisham was “candid” about events in the White House at the time, many of which Grisham was present for, including knowledge of conversations involving former President Donald Trump that day.

Stephanie Grisham, speaking on @NewDay after talking to Jan. 6 committee, says Trump was “gleefully” watching the Capitol attack from the WH dining room, hitting rewind and saying: “Look at all those people fighting for me.”

Former White House press secretary Stephanie Grisham told CNN that a group of former Trump administration officials plan to meet in the coming weeks to “try and stop” Trump as he continues to “manipulate people and divide our country.”https://t.co/tJBeFi0zKS pic.twitter.com/jJPV4Vuc8s

Hmm. Former press secretary Stephanie Grisham says on CNN that about a dozen former Trump aides are currently discussing how they can “formally do some things to try and stop him” and plan to meet next week. She declines to say who, but says there are “about 15” of them.

Here’s the clip of Stephanie Grisham telling @JohnBerman & @brikeilarcnn that Donald Trump was in the WH dining room with his TV clicker “gleefully watching” January 6 unfold.

She is cooperating with the @January6thCmte.

Previous Rafael Nadal To Novak Djokovic: You Knew The Rules
Next Russia Sends Troops To Kazakhstan To Quell Unrest