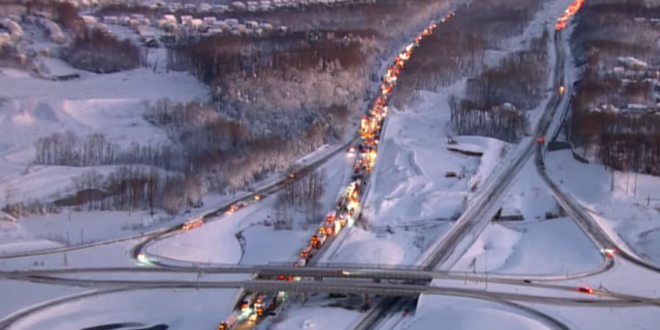 Drivers have been stuck on Interstate 95 in the Stafford County, Virginia, area for more than 15 hours after multiple trucks crashed amid a major snowstorm that left snow and ice packed onto the road. Many drivers are out of gas. Some don’t have food or water. Some say they have kids, pets and family members with medical needs in the car.

As of 7 a.m. Tuesday, traffic was at a standstill. The Virginia Department of Transportation confirmed both directions of I-95 are shut down between Ruther Glen, in Caroline County, and Exit 152 in Prince William County. That’s a 48-mile closure through the Fredericksburg area, which recorded 14.1 inches of snow Monday.

I started my normal 2 hour drive to DC at 1pm yesterday. 19 hours later, I’m still not near the Capitol. My office is in touch with @VaDOT to see how we can help other Virginians in this situation. Please stay safe everyone. pic.twitter.com/Sz1b1hZJZ5

STRANDED ON I-95: Drivers have been stranded for 15+ hours on part of I-95 in Virginia. The interstate was shut down Tuesday through the Fredericksburg area. Chopper4 flew over the scene. https://t.co/UQEv00pPUa

Hundreds of motorists have been stuck in the snow for more than 15 hours along I-95 in Virginia after a crash brought traffic to a halt. People have been posting increasingly desperate messages on social media about running out of fuel, food and water. https://t.co/ASdw3KaFi7

Skyfox just now over some of the hundreds of motorists who have been stuck on I-95 in Virginia since yesterday afternoon pic.twitter.com/xorYW0sUbx

“It’s just terrible out here. Miles and miles and miles of stoppage.” Drivers have been stranded on I-95 in Virginia for more than 18 hours after a major snowstorm. https://t.co/odfWNaDaz0 pic.twitter.com/GPscKFWDZE

Wow—hundreds of drivers have been stuck in the snow for 15+ hours along a 50-mile stretch of I-95 in Virginia after a crash involving six tractor-trailers due to the winter weather. Unbelievable. #7news pic.twitter.com/8Nh5XM0ZAV

“There are miles and miles of people who have been backed up all night and are still waiting in their cars.”@JoshNBCNews describes his experience being stuck in his car with his dog overnight on I-95 in Virginia after a winter storm slammed the area. pic.twitter.com/dgpfAXRGuZ

We’ve been getting calls from people stranded on I-95 for up to 16 HOURS!!

People running out of gas and food while stuck in awful backups lasting for miles and miles.

We’ll be covering it all this morning on @8NEWS pic.twitter.com/XdJvgMBF57

I just interviewed a Virginia Beach resident named Andy who has been trapped on I-95 near Dumfries since 7:30 last night. This is what he is seeing on the ground. His full story on FOX43 in minutes. @WAVY_News pic.twitter.com/7EuTs8g8sC