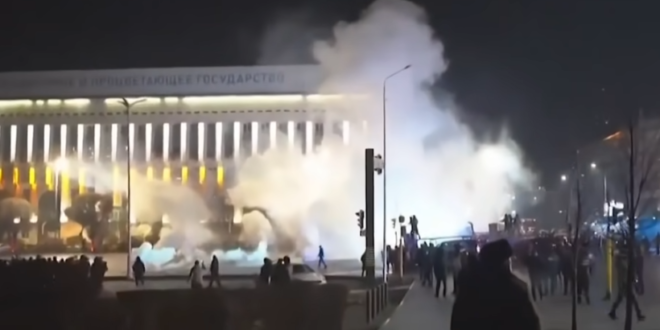 Russia sent paratroopers into Kazakhstan on Thursday to help put down a countrywide uprising after deadly violence spread across the tightly controlled former Soviet state.

Police said they had killed dozens of rioters in the Central Asian country’s main city Almaty. State television said 13 members of the security forces had died, including two found decapitated.

A presidential residence and the mayor’s office in the city were both ablaze, Reuters journalists said. By Thursday afternoon, the city’s airport, seized earlier by protesters, was under firm control of military personnel. Burnt out cars littered the streets.

“A Russian-led military alliance said late Wednesday it would send peacekeeping forces to Kazakhstan…Russia is notorious for sending in troops under the guise of peacekeeping missions that go on to establish a permanent presence in the host countries.” https://t.co/2H0hBTAoIb

As protests turn deadly, the EU calls on Russia to respect Kazakhstan’s sovereignty.

Previous Stephanie Grisham: Trump “Gleefully” Watched The Riot On TV, Said “Look At All Those People Fighting For Me”
Next LIVE VIDEO: Biden And Harris Speak On Capitol Riot