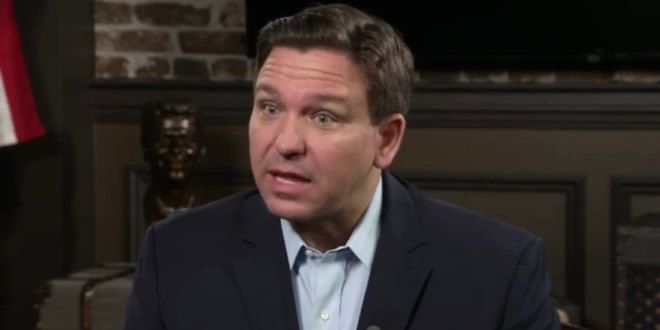 “Their political agenda is, they want these kids to hate this country. They want to them to reject our founding, our institutions, and they want to replace that with their leftist ideology which would obviously be disastrous for this country’s future.

“So the stakes are very high on that. But there’s a problem when – you say you can’t do it, but what if they defy you? What if they’re doing it?

“So what we’re gonna be doing in this upcoming legislative session is, we’re gonna give parents the ability to get legal relief if they’re not following our state standards with respect to history and government.

“And I think empowering parents to be involved – making sure parents have the right to inspect the curriculum – and it’s not just about critical race theory.

“There’s a lot of other inappropriate content that can be smuggled in by public schools and some parts of the country have it way worse than Florida in that regard.” – Gov. Ron DeSantis, last night on Fox News.

Ron Desantis tonight says that liberal educators are “teaching kids to hate this country,” so he is pushing for a new law so parents can “inspect curriculum,” and sue schools if they catch teachers who “smuggle in” any “inappropriate content.” pic.twitter.com/PTc3EZXskv