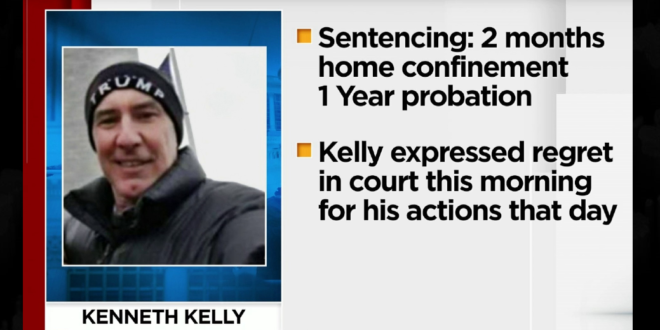 Rioter Who Thought He Broke Into WH Gets Probation

The Florida doctor who lost his marriage, job, and home after he entered the Capitol on Jan. 6 and later bragged about it has been sentenced to one year of probation, including two months of home detention. Kenneth Kelly, 59, and his friend Leonard Gruppo had traveled together from Florida to attend Donald Trump’s rally on Jan. 6. They were later seen on surveillance video footage inside the Capitol building.

“Inside White House via breaking in windows!” Kelly said in a text message. “Tree of liberty was watered today!” “Patriots stormed the White House [sic], broke in while Senate (with a little s) was in sessiondenating [sic] Arizona. The [sic] were hiding under ther [sic] desks. Forced into recess. Patriots took back our capital today,” he also texted, again erroneously identifying the Capitol as the White House.

“I greatly regret my error in judgment. I know it was wrong and it always will be wrong,” he told the judge today. pic.twitter.com/o5vzuc9Qa0

“Inside White House [sic] via breaking in windows… Tree of liberty was watered today!”

One of the Capitol rioters who couldn’t get his branches of government straight is set to be sentenced at 10. Feds want two months home detention. pic.twitter.com/ymov996nFC

“It’s embarrassing,” Kenneth Kelly said when he pleaded guilty. “I probably didn’t have the education to name the building correctly.” https://t.co/GFX9V4tRT8

Previous GOP West Virginia Gov: The Vaccine Just Saved My Life
Next Olympians Told To Use Burner Phones While In China