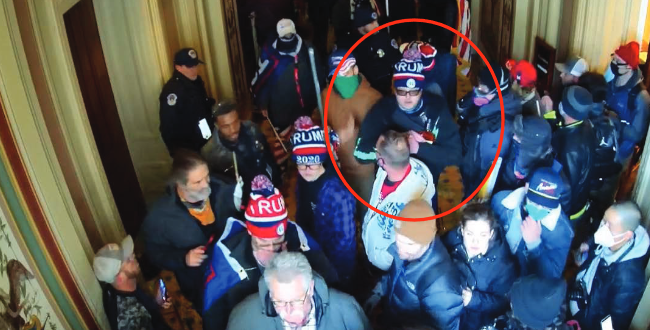 Rioter Seeks To Force Trump, Bannon To Testify At Trial

An accused MAGA rioter has created a list of all-star witnesses he wants to testify at his trial, including former President Donald Trump, attorney Rudy Giuliani, and podcaster Steve Bannon. Via Politico‘s Kyle Cheney, an attorney representing January 6th defendant Dustin Thompson revealed on Friday that his client “intends to subpoena numerous witnesses involved in the planning and execution of the attempt to disrupt the certification of the 2020 presidential election.”

Read the full article. As you can see below, Thompson also wants to subpoena Stephen Miller, Lin Wood, and Sydney Powell.

A Jan. 6 defendant, Dustin Thompson, is asking a court to appoint US marshals to help him subpoena Trump, Rudy, Bannon et al pic.twitter.com/VT5GynDegS

Dustin Thompson. Snuck into the Capitol, stole a bottle of bourbon, snuck back in with a friend. Tried to steal a coat rack in front of Capitol police after he was ordered to leave. Indicted on *SEVEN COUNTS* pic.twitter.com/NzHFvcjRHG