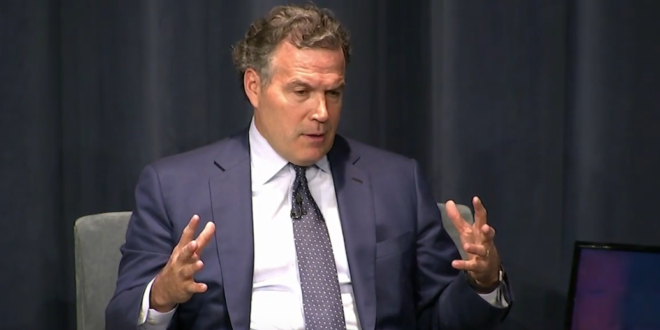 David McCormick, who stepped aside earlier this month as chief executive officer at giant hedge fund Bridgewater Associates, filed the paperwork needed to enter the Republican primary for a U.S. Senate seat in Pennsylvania.

The first-time politician filed a statement of candidacy Wednesday with the U.S. Federal Election Commission. McCormick is jumping into the race to succeed Republican Pat Toomey, who is retiring, in a field that includes celebrity physician Mehmet Oz, among others.

He’s half of a finance power couple along with Goldman Sachs Group Inc.’s Dina Powell McCormick, his second wife, and the race will test whether his finance background resonates with an increasingly populist Republican base. Powell was Trump’s deputy national security adviser.

Read the full article. Bolding is mine.

David McCormick, who stepped aside as CEO at giant hedge fund firm Bridgewater, is jumping into the Republican primary for a Pennsylvania U.S. Senate seat https://t.co/7jKg16QoRz

Both were timed to coincide with the former hedge fund CEO’s expected entry into the race for the Republican Senate nomination. https://t.co/ELQuizEKEY

The Pennsylvania Senate race will be one of the toughest and most expensive in the country as former hedge fund executive David McCormick is soon expected to join a crowded field that also includes celebrity surgeon Mehmet Oz. https://t.co/CnKuyPxClD