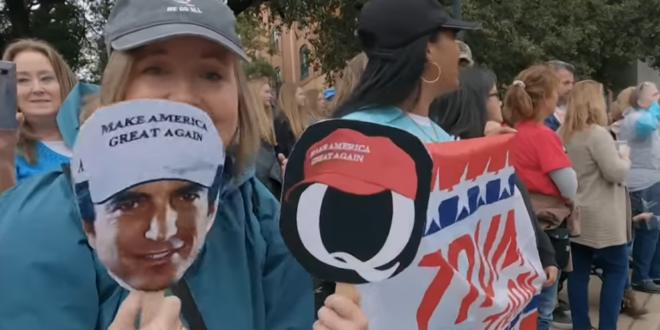 In the crowd at Trump’s [Arizona] rally will be Michael Brian Protzman, the leader of the QAnon cult that has been holed up in Dallas for the last three months predicting the return of John F Kennedy.

In an audio chat on Tuesday, with over 1,000 people listening, Protzman once again claimed that President Joe Biden was never inaugurated and hasn’t been living and working in the White House but rather is actually part of a movie being filmed on a set in Culver City, California.

Some of Protzman’s supporters have also spotted that Trump’s official announcement mentions “live entertainment” as part of the rally, and suggested that this will involve a band made up entirely of dead musicians and singers, including Michael Jackson, Prince, Whitney Houston, Janis Joplin, Tupac, and John Lennon.

Read the full article. There’s so much more crazy. Back in November, Protzman reportedly claimed that a Rolling Stones concert in Dallas featured Prince, Michael Jackson, and Aaliyah on backup.

A who’s who of QAnon influencers are showing up to support Trump at his first 2022 rally.https://t.co/LS8t6woUJp

This is Michael Brian Protzman, an antisemitic cult-like leader who has a loyal and obsessive following of over 100,000 people online — who convinced hundreds of them to travel to Dallas this week to witness the return of JFK.https://t.co/LdUNaGTuwf