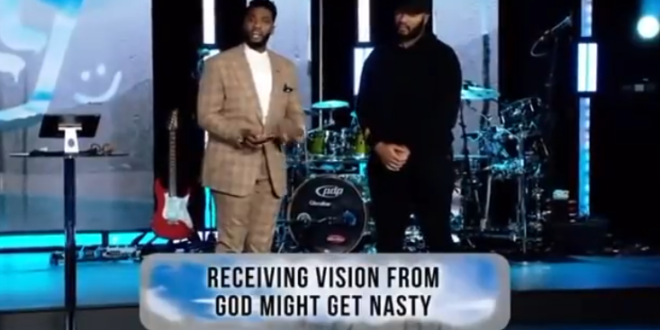 Popular Pastor Michael Todd of Transformation Church in Bixby, Oklahoma, drew the wrath of the internet and became a trending topic on Twitter as a clip from his message on vision Sunday showed him wiping globs of spit on a congregant’s face even as the coronavirus pandemic rages. Before the demonstration, Todd detailed that as he was preparing his message for the sermon this week, God used the words of late singer Johnny Nash’s song “I Can See Clearly Now” to inspire him.

“I began to listen to those words. And God said, ‘Michael, the past two years have been like raining over people’s lives.’ And he said they need to prophetically declare that, ‘I can see clearly now that the rain is gone,'” Todd told congregants. Many onlookers who watched the demonstration from outside the church expressed disgust over Todd’s actions, which triggered a mountain of online memes.

The sermon had something to do with Jesus supposedly spitting in the eyes of blind man. Transformation Church has 1.6 million followers on YouTube. In the clip below, the pastor audibly hocks loogies into his palm as the congregation groans.

Had never heard of “Pastor” Mike Todd before today. But I truly understand now why the elders used to frequently tell us that we’re in the last days.

What is the CDC going to do about Mike Todd?

I ain’t never seen all sides of Christian Twitter unified on an issue like this. Not Mike Todd being so unhinged it’s bringing unity to the body

The Mike Todd situation is exactly why we need more faithful Bible teaching churches, not entertainers who seek to go viral every Sunday.

I’m all for the practicality of sermons being explained, but when is enough enough?

Me: Lord why they talking about Mike Todd now?

That Mike Todd video has so many layers of terribleness wrapped up in it, I don’t know even where to start. The audacity. The cult energy. The spiritual and theological abusiveness. The hocking and rubbing and spitting and deflecting. I couldn’t believe my eyes. Ain’t no way.

If your pastor rubs spit on your face (looking at you, Mike Todd), find a new pastor.

I hope people realise that Mike Todd’s previous antics led to this.

This is why all these theatrics are problematic. When they’re not curtailed, they get more extravagant to it becomes ridiculous, or worse, heretical.

He degraded that man. He should apologise swiftly.