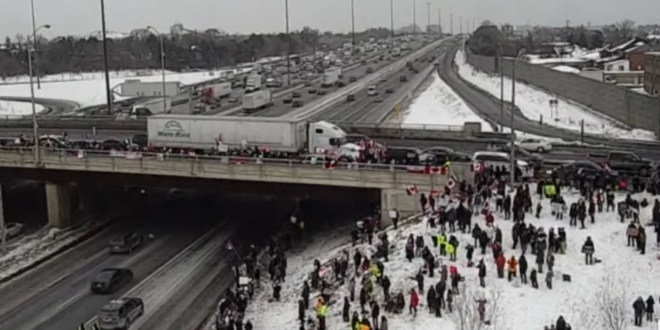 A “Freedom Convoy” of truckers and supporters departed Kingston, Ont. shortly after 8:30 a.m., according to police there. They are scheduled to arrive in Ottawa around 12 p.m. Ottawa police are scheduled to hold a news conference at 11 a.m. on their preparations for the convoy’s arrival.

Ottawa police and Ontario Provincial Police are urging residents to avoid highways 416 and 417 this weekend, along with downtown Ottawa, as the convoy arrives. Ottawa Public Health has closed two vaccination clinics in the Glebe and Lowertown in anticipation of traffic disruptions this weekend.

Ottawa Mayor Jim Watson reiterated his message to the truckers Friday morning, asking people to come peacefully and respectfully. “Don’t harass someone, a 17-year-old employee making minimum wage, because you won’t wear a mask. Be sensible and be kind to one another.”

“We’re seeing signs calling our government communists and Nazis and comparing [the mandate] to the Holocaust. And if you’re comparing this to the Holocaust, you need to educate yourself,” Mike Millian, president of the Private Motor Truck Council of Canada told CBC Radio’s Metro Morning.

What began as a group of truckers against the cross-border trucking vaccine mandate has amassed the support of groups broadly opposed to public health measures in general, with some even calling for a Canadian version of the Jan. 6 storming of the U.S. Capitol.

In Vaughan, Ont., truckers were met by crowds of supporters  who came out to voice their opposition to pandemic public health measures. Some appeared to be more on the fringe, holding signs like: “Join or Die” and “Liberty or Death.” One supporter was seen draped in the flag of the far-right group the Proud Boys.