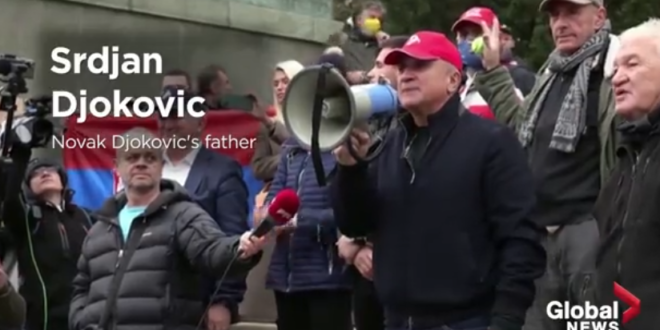 Novak Djokovic is a victim of a “political witch hunt” claimed Serbian president Aleksandar Vucic as fans in Belgrade and family members rallied in support of the embattled tennis star after Australian authorities cancelled his entry visa. In the Serbian capital Belgrade, Djokovic’s father Srdjan led a demonstration alongside a few hundred others in front of the country’s parliament as Morrison came under further attack.

Srdjan shouted into a megaphone, as the crowd waved Serbian flags and homemade signs, including a banner that read: “They are afraid of the best, stop corona fascism.” Srdjan bellowed,“They’re keeping him in captivity. They’re stomping all over Novak to stomp all over Serbia and Serbian people. Jesus was crucified on the cross but he is still alive among us. They are trying to crucify and belittle Novak and throw him to his knees.”

Read the full article. Djokovic’s father went on to attack Australian Prime Minister Scott Morrison, saying, “We are humans and you are not.”

Watch: Novak Djokovic’s family accuse Australia of treating the tennis star like a criminal while he fights deportation

Part 2 of Novak Djokovic in Australia: 5 minutes including an immigration hotel, a deportation order, the Australian PM, the Serbian President – and Djokovic’s father comparing him to water and Spartacus. Produced by Jack Kilbride. https://t.co/xmfQuRHMdO pic.twitter.com/ZcHhF4aIRW