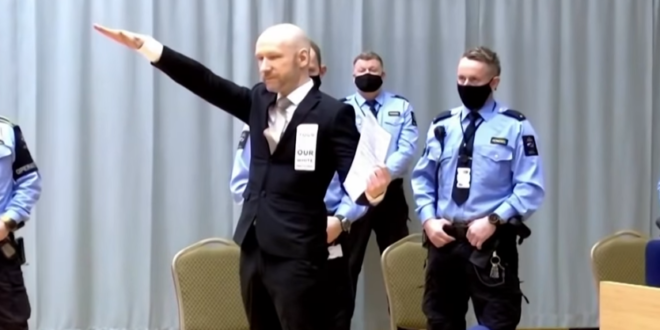 Anders Behring Breivik, the far-right fanatic who killed 77 people in massacres in Norway in 2011, appeared at a parole hearing Tuesday, seemingly more focused on spreading white supremacist propaganda than gaining an improbable early release from prison.

Breivik, sporting a stubble beard and a two-piece suit, walked into a prison gymnasium-turned-courtroom with white supremacist messages pinned to his blazer and his bag. He held up a sign with the same message.

As he did during his trial, he made Nazi salutes as he entered Tuesday. He also presented himself as the leader of a Norwegian neo-Nazi movement.

Breivik’s 2011 manifesto included praise of US anti-Muslim extremist Pamela Geller. His manifesto has since been cited in similar writings by other terrorists, including New Zealand mass shooter Brenton Tarrant, who also praised Trump.