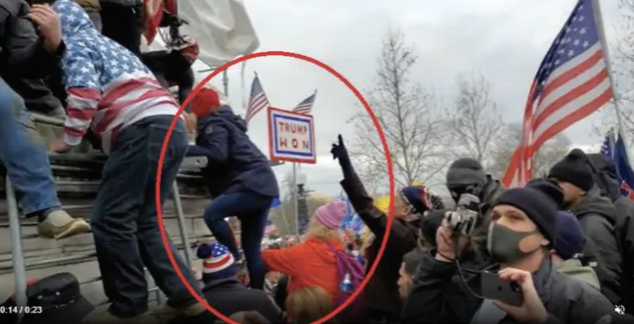 Carla Krzywicki, 20, and her mother Jean Lavin, 56, pleaded guilty Tuesday to a single count of parading, demonstrating, or picketing inside a capitol building. The misdemeanor charge carries a potential jail sentence of six months.

Lavin and Krzywicki got into the capitol from one of the building’s terraces, which they reached by climbing a bike rack that the mob had turned into a ladder. Police had originally been using the bike rack as a barricade against the protestors.

Photos and video show Lavin carrying a sign that said “Trump Won” on one side; the other side said as follows: “Don’t allow 7 states of cheaters to hijack our election!” “This is history,” Krzywicki wrote on Facebook. “We come for the government officials that are ruining our country. Change needs to happen.”

Video shows Jean Lavin and Carla Krzywicki using a bike rack as a ladder to enter the U.S. Capitol. https://t.co/KZMH9e7Aoa

Parading pleas from the mom/daughter team of Lavin/Kryzwicki are accepted. Mom is a HS grad, daughter is in 2nd yr of community college. Sentencing set for 4/22 in person before Judge Howell.https://t.co/yLhcqPl8dFhttps://t.co/JtzyE96r0Y