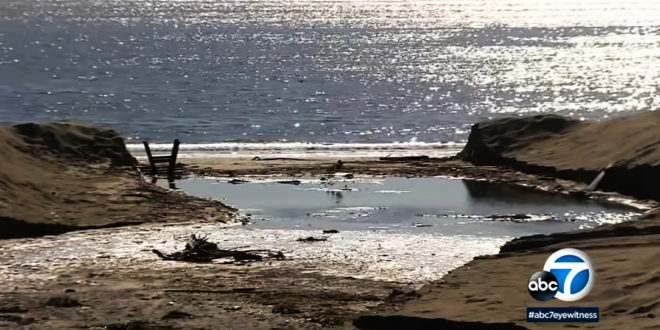 A sewer main line failed in the city of Carson and millions of gallons of untreated sewage was discharged into the Dominguez Channel, a waterway that empties into Los Angeles Harbor.

Officials estimate about 8.5 million gallons of sewage flowed from the line, Bryan Langpap with the Los Angeles County Sanitation Districts told the Orange County Register on Saturday. The flow was stopped Friday night.

At least five beaches were closed on Saturday, according to the Los Angeles County Department of Public Health, disrupting holiday plans and leading to the cancellation of some events, such as the 70th annual Polar Bear Swim at Cabrillo Beach.

Dr. Anissa Davis, the Long Beach City health officer, said in a statement on Friday that inspectors were “monitoring water quality along the affected beach sites,” and that beaches would be closed until the water quality met state requirements.

Untreated sewage and polluted water can expose swimmers to pathogens, according to the U.S. Environmental Protection Agency. Janice Hahn, a member of the Los Angeles County Board of Supervisors, said on Twitter on Friday that “a spill of this magnitude is dangerous and unacceptable, and we need to understand what happened.”

Seal Beach’s Surfside Beach and Huntington Beach’s Sunset Beach are closed due to a sewage spill caused by a blockage of a sewer main line in Carson. The area will stay closed to swimming, surfing, and diving until water quality meet acceptable standards. https://t.co/71BjsorNlG pic.twitter.com/6lO4wZmN56