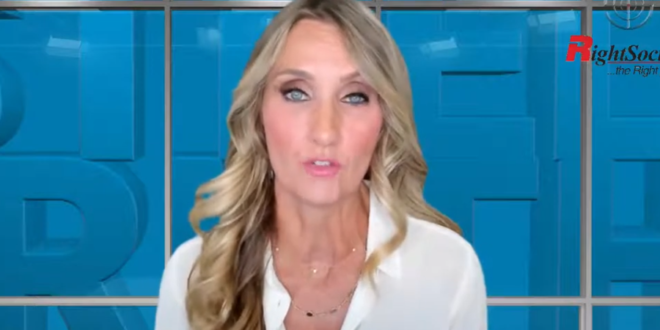 Earlier this week, QAnon conspiracy theorist Ann Vandersteel posted an image of a document on her Gab account proudly announcing that she was “officially an American State National” and no longer had any legal obligations to the federal government. On Wednesday, Vandersteel appeared on “The Conservative Daily Podcast,” where she touted the supposed benefits of becoming an “American state national,” from no longer having to pay federal taxes to getting to “vote as a delegate, which has the power of four votes.”

Vandersteel is a right-wing conspiracy theorist who once bragged about being a member of the “Trump Team 2020 FL Media Advisory Board,” forcing the Trump campaign to publicly disavow her. Now she serves as host of her own daily program called “Steel Truth” and has been a regular participant in the traveling cavalcade of election, COVID-19, and QAnon conspiracy theorists who make up the ReAwaken America tour.

Vandersteel first appeared on JMG in 2020 when she declared that both Clintons had been executed for satanic child abuse and that Trump would show their killings on a White House pay-per-view channel.

One of the men seen below, Joe Otlmann, has declared that the COVID that has so far killed at least two attendees of a Reawaken America event was actually a bioweapon sprayed onto their food by deep state operatives posing a hotel staff. Or something.

Joe Oltmann: “I want people to go out there & get some wood. The gallows are getting wider & longer. We should be able to build gallows all the way from Washington DC to California. I want to hang anyone that is a traitor. We just have a line of executions of traitors to the USA. pic.twitter.com/t8XJnFfVOd