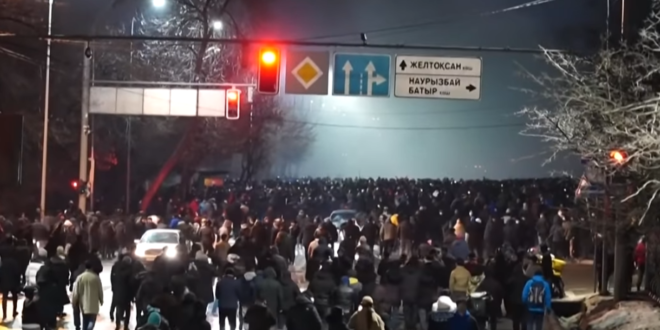 The revolt began on Sunday in western Kazakhstan as a protest against a surge in fuel prices. Four days later, with government buildings, TV stations, the airport and numerous businesses stormed by thousands of anti-government protesters, the uprising has expanded into a full-throated attack on an entrenched Kazakh elite widely reviled as autocratic and corrupt.

Footage posted online on Wednesday showed thousands of people storming the main government building in the country’s largest city, Almaty. Apparently unsatisfied by an announcement early Wednesday that the entire government would be sacked and that new parliamentary elections were possible, protesters took control of the country’s main airport.

The protests reverberated across the continent to Moscow, where President Vladimir V. Putin was forced to witness another uprising against an authoritarian, Kremlin-aligned nation, following pro-democracy protests in Ukraine in 2014 and in Belarus in 2020.

Read the full article. Kazakhstan has a population of 20 million and is nearly four times the size of Texas.

Local news reports say the presidential residence in Kazakhstan’s largest city is engulfed in flames and armed protesters have stormed another government building. The demonstrations were sparked by a rise in fuel prices and have escalated sharply. https://t.co/5q3jQ25f16

Previous LIVE VIDEO: Merrick Garland Speaks On Capitol Riot
Next Cruz: GOP Will Impeach Biden If They Win The House