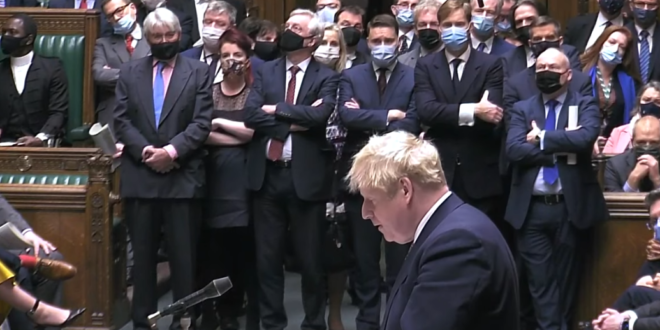 Facing a potentially lethal threat to his leadership, Prime Minister Boris Johnson of Britain on Wednesday offered a contrite apology in Parliament for attending a garden party at 10 Downing Street while the country was under lockdown.

He acknowledged that he had deeply offended the public, even as he claimed that he had not breached his government’s regulations on gatherings during the early days of the pandemic.

“I want to apologize,” Mr. Johnson said during an extraordinarily tense session of Prime Minister’s Questions. “I know there are things we simply did not get right, and I must simply take responsibility.”

An invitation to the “socially distanced drinks” gathering was emailed to about 100 people by a senior prime ministerial aide. At the time, people in Britain were barred by law from meeting more than one person outside their household.

Johnson’s lunchtime appearance at the weekly Prime Minister’s Questions session in the House of Commons was his first public appearance since details of the party emerged.

The prime minister struck a tone of contrition, but urged people to await the conclusions of an investigation by senior civil servant Sue Gray into several alleged parties by government staff.

He asks why the only person to resign over the issue so far is Allegra Stratton – a senior government spokeswoman who stepped down after a video showed her joking about No 10 staff holding a lockdown Christmas Party at Downing Street.

By contrast, Davey points out that Boris Johnson – “who sanctioned and attended at least one party in No 10” – remains in post. “Will he accept that the party is over and decide to resign?” he asks.

As you’ll see, Johnson was jeered.