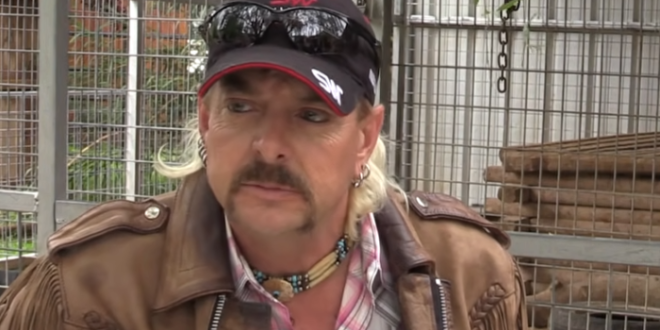 In November 2020, reps for Exotic blew $10,000 at Trump’s DC hotel in a laughably blatant attempt to buy a pardon.

Exotic was so sure that a pardon was coming, he had a limo waiting outside his prison.

When the pardon never came, he ranted that he was “too gay” for Trump to care about him.

During a White House press conference, Trump had joked about “looking into” a pardon for Exotic after Junior tweeted that such a move would “enrage the libs.”

Last fall Exotic pleaded in vain for “compassionate release” due to prostate cancer.

Joseph Maldonado-Passage, aka “Tiger King” Joe Exotic, was re-sentenced to 21 years in prison today, one year less than his original sentence, on a murder-for-hire charge against rival zoo-owner Carole Baskin.

Here, his attorneys say they will appeal the ruling: pic.twitter.com/zV1s3sYfib