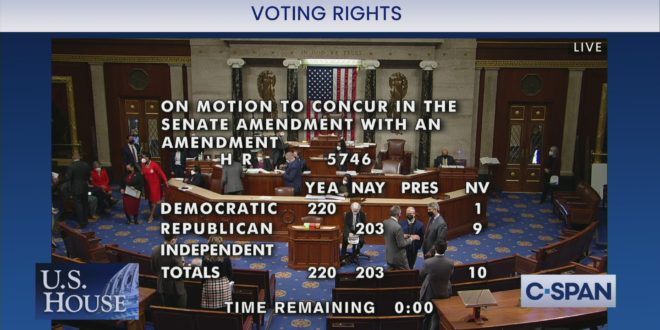 Acting as part of a Democratic plan to expedite consideration of the bills in the Senate, the House approved the new measure on a party-line vote of 220 to 203 after a heated partisan debate in which lawmakers clashed over the state of election laws across the country.

The new legislation combined two separate bills already passed by the House — the Freedom to Vote Act and the John Lewis Voting Rights Advancement Act — and joined them in what had been an unrelated measure covering NASA.

The move will allow the Senate to bring the bill directly to the floor, skirting an initial filibuster, although Republicans could still block it from coming to a final vote.

Goes now to the Senate. pic.twitter.com/95MJkb1d7w

🚨BREAKING: The U.S. House passes #HR5746, the Freedom to Vote: John R. Lewis Act. The vote was 220-203, no House Republicans supported the bill. The legislation now goes to the Senate. https://t.co/C7zxSqTY3k