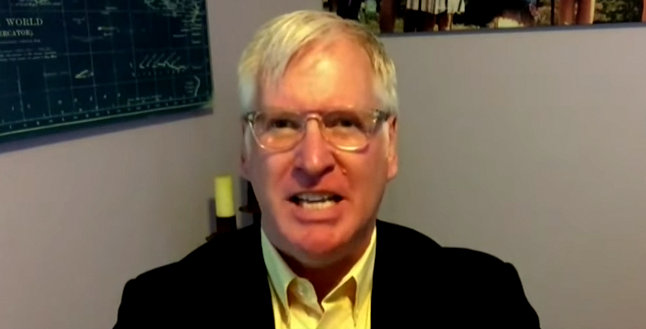 And the feud recently reached a climax when a lawyer representing The Gateway Pundit allegedly sent an email threatening a lawsuit against a far-right podcaster who welcomed Gionet onto his show to respond to allegations that he’s a federal agent.

In December 2021, Hoft, who has been repeatedly dubbed “the dumbest man on the internet,” published an article claiming Gionet, an ally of white nationalist Nicholas Fuentes’ “groyper army,” is an undercover federal agent who deliberately sought to incite violence at the Capitol to frame then-President Donald Trump and his allies.

Read the full article. Oh so much deliciousness.

On the above-cited podcast, Gionet and the host accused Hoft of being “interested in young boys” due to his recent marriage to a young immigrant.

Hoft is being sued by two Georgia election workers who say his posts resulted in death threats against them. He’s also being sued by a employee of Dominion.

Gionet was charged in the Capitol riot last January and was arrested again last month for defacing an Arizona Hanukkah display.

Gionet appeared on JMG in June 2021 when he live-streamed himself ridiculing victims at Orlando’s Pulse memorial. He appeared here in March 2021 when he petitioned federal prosecutors to remove his ankle monitor because “I’m a Christian.”

There’s more drama on the right-wing and this time the feud is between Gateway Pundit founder Jim Hoft and Capitol rioter Tim Gionet https://t.co/1J5erey0GY

Previous Anti-Vaxxers Are Claiming Booster Killed Betty White
Next Johnson: Why Do We Think Vax Is Better Than God?