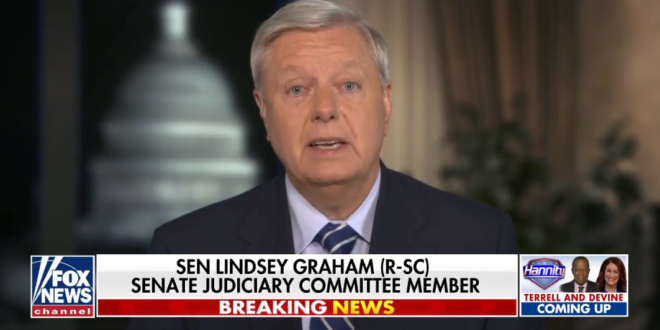 Senator Lindsey Graham (R-SC) wasted no time ripping Joe Biden for his speech remembering Jan. 6, accusing the president of “brazen politicization.” Graham disagreed with the tenor of Biden’s speech, which he blasted in a tweet that somehow invoked the Taliban.

This, of course, is very different from what Graham said a year ago [clip below] on the day of the Capitol riot. The senator claimed that he was done with Trump, moments after the extraordinary violence and mayhem of that day, as Congress was about to certify the former president’s defeat.

What brazen politicization of January 6 by President Biden.

I wonder if the Taliban who now rule Afghanistan with al-Qaeda elements present, contrary to President Biden’s beliefs, are allowing this speech to be carried?

The Biden Administration seems to be incapable of dealing with the challenges America faces, and their efforts to politicize January 6 will fall flat.

The Biden Presidency, one year after January 6, is in free fall not because of the attack on our Capitol, but because of failed policies and weak leadership.

I still cannot believe a mob was able to take over the United States Capitol during such a pivotal moment – certifying a presidential election.

It would have been so easy for terrorists to boot strap onto this protest and wreak even further destruction on the U.S. Capitol.