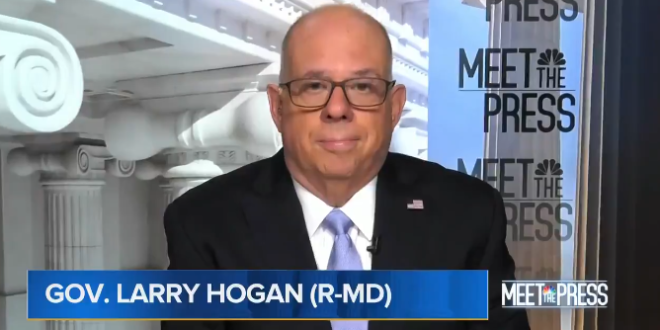 Senate Minority Leader Mitch McConnell and other top Republicans are stepping up a personal campaign to persuade Maryland Gov. Larry Hogan to run for the Senate and help the party’s chances of regaining control of the chamber. The recruitment effort has included McConnell’s wife, Elaine Chao, who held Cabinet positions in the Trump and George W. Bush administrations.

Moderate Senate Republicans, including Susan Collins of Maine, have also been in direct contact with Hogan to note that his centrist brand of politics would be welcome in a chamber riven with partisanship. Officials have made financial pledges or shared internal polling to try to convince Hogan that he has a path to victory. President Joe Biden carried Maryland by 32 percentage points in 2020 and a Republican hasn’t won a statewide federal office in more than 30 years.

Read the full article. Hogan is being term-limited out of office. If he runs, he would challenge Democratic incumbent Sen. Chris Van Hollen. Maryland’s Senate and gubernatorial primaries are in June.

Senate Minority Leader Mitch McConnell and other top Republicans are stepping up efforts to persuade Maryland Gov. Larry Hogan to run for the Senate and boost the party’s chances of regaining a majority. https://t.co/5avOYYjrAF

Previous Trudeau: Canada Has Enough Vax For 4th Dose For All
Next Carlson: Nancy Pelosi Looks Like Michael Jackson