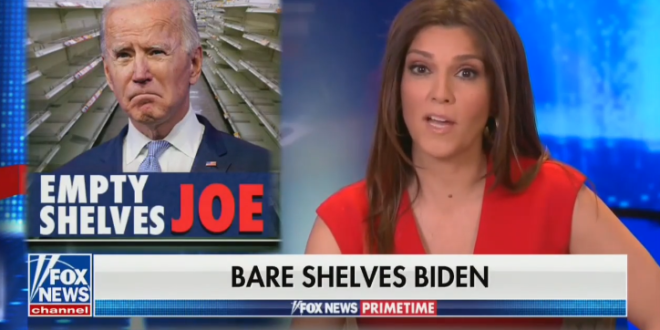 The graphic showed an image of President Joe Biden superimposed over a photo of the empty shelves. But as one eagle-eyed Twitter user pointed out, the image is actually from a 2011 NPR story about residents fleeing the disaster area near the Fukushima nuclear power plant.

This isn’t the first time Fox News has used photos of empty shelves that have nothing to do with the contemporary U.S. economy. In October, The Ingraham Angle issued a correction after it aired photos from the beginning of the Covid-19 pandemic during a segment about global supply chain problems.

Uhh is this the same picture? pic.twitter.com/NzYkWrAAFc

Previous Lindsey Graham: I Won’t Vote For McConnell As Leader Unless He Proves To Me That He Will Suck Up To Trump
Next Nevada GOP Sent Fake Docs Declaring Trump Winner