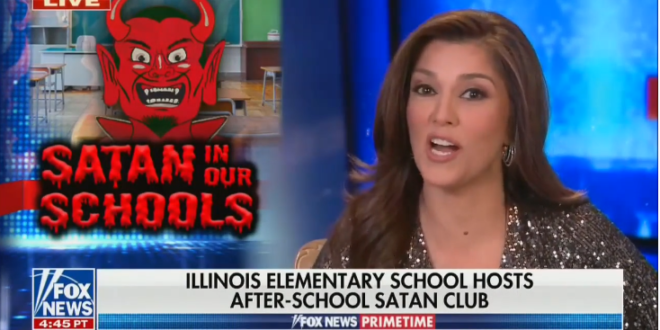 Fox Host: Satanism In Schools Is Worse Than COVID

On Friday’s Fox News Primetime, host Rachel Campos-Duffy ran a segment on Satanism in public schools that was reminiscent of the satanic panic of the 1980s. “For two years, the left has claimed that schools are unsafe for children due to Covid,” she said. “But there’s something much more terrifying lurking in the halls of one school in Illinois.”

The host informed her audience that a Satan club – sponsored by the Satanic Temple – had held its first ever meeting at an elementary school in Illinois. “That’s right – a Satan club.”

“But that isn’t an isolated incident,” Campos-Duffy said. “Satanists are taking up cultural space all across America, like in the Illinois state house where they successfully put up a statue of baby Satan. And you have heard of Comic-Con, right? “Well, there’s a Satancon taking place next month in Arizona.”

As most of you surely know, the Satanic Temple is a group of atheist pranksters who flatly say on their website that Satan does not exist.

In the clip below, Campos-Duffy’s guest, a Catholic podcaster, admits as much, but implies that they are lying about believing in Satan.

Basically, the Satanic Temple exists to troll and counter indoctrination campaigns by Christianists. Such as in public schools.